Fr. Victor is a true local. He was born and raised in Clearwater, graduated Clearwater High School, and attended the University of Central Florida. He studied at St. John Vianney College Seminary (Miami) and St. Vincent de Paul Regional Seminary (Boynton Beach) and was ordained a priest for the Diocese of

St. Petersburg in 2012. Fr. Victor served here at St. John Vianney as parochial vicar for two years before being transferred to Nativity (Brandon). In 2016 he was sent to Rome for a S.T.L. in Sacramental Theology. After completing his studies in Rome, he was assigned as parochial vicar at Our Lady of Lourdes (Dunedin). As of July 1, 2021, Fr. Victor has been appointed as the Pastor of  St. John Vianney Parish.

Fr. Joshua Anthony Bertrand was born on August 15th, 1988 at the Orlando, Florida Naval Training Station Hospital, to Marguerite and Robert Bertrand. He grew up in Kissimmee, Florida residing in rural Western Osceola County. Fr. Joshua attended Celebration High School, playing football, wrestling, and track and field. In May 2012 Fr. Joshua graduated from the University of South Florida with a Bachelor of Arts in History and following graduation entered seminary for the Diocese of St. Petersburg in August of 2012.

He first attended St. John Vianney College Seminary in Miami for pre-theology earning a Bachelor of Philosophy in 2014. During a leave of absence from seminary for discernment purposes Fr. Joshua was employed as a security guard for a concert venue in Orlando and worked as a Land Surveyor for a Civil Engineering and Land Surveying company. Upon reentering priestly formation, Fr. Joshua was sent by Bishop Robert Lynch to seminary at the Pontifical North American College in Rome and studied at the Pontifical Gregorian University operated by the Society of Jesus (commonly known as the Jesuits).

On August 15th, 2020, Fr. Joshua was ordained to the Sacred Priesthood by His Excellency Bishop Gregory Parkes at the Cathedral of St. Jude the Apostle in St. Petersburg. Fr. Joshua received his Licentiate of Sacred Theology specializing in Dogmatic Theology in 2021 from the Gregorian University. Fr. Joshua has ministered previously at St. Ignatius of Antioch in Tarpon Springs before being assigned to St. John Vianney. Fr. Joshua is an outdoors enthusiast who grow up fishing and hunting with his father, he also enjoys gardening and cooking. He has one older sister who resides in Copenhagen, Denmark with her family. 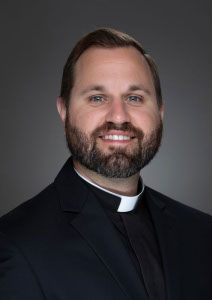 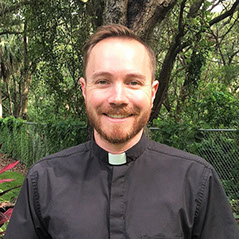 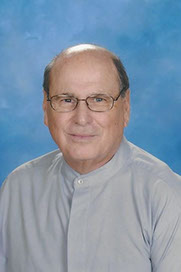 Dcn. Richard Santello is a native of New Haven, CT. He and his wife, Angela, were married on November 21, 1959 and is the father of four children and three grandchildren.  He served in the U.S. Navy and then completed his education in business and finance, working as a financial planner for more than 20 years. After his studies at St. Thomas Seminary, Bloomfield, CT, he was ordained to Diaconate on October 31, 1976 by the late Most Rev. John F. Whalen, Archbishop of Hartford.

Prior to moving to Florida and being assigned to St. John Vianney Parish, he served in 10 parishes

in the Archdiocese of Hartford, having been the co-founder of St. Elizabeth Seton Parish, Rocky Hill, CT.  He also served as the Director for Deacons, Archdiocese of Hartford, president of the National Association of Diaconate Directors (NADD), a consultant to the U.S. Council of Catholic Bishop’s Committee on the Diaconate, the Board of the International Diaconate Center (IDC/IDZ) Rottenburg, Germany.  He was an instructor of Liturgy and Homiletics for Diaconate Formation, and vice-president of the National Catholic Bereavement Association (NCBA)

Dcn. Santello and his wife have ministered to bereaved parents for more than 25 years founding several bereaved parents’ groups including Compassionate Friends.  He presently serves on the Advisory Committee for the Diaconate, Diocese of St. Petersburg.

REGISTRATION FOR THE PARISH